What most crises have in common is that they hit the most vulnerable and marginalized populations—among which women are disproportionally represented—the hardest. The impact of the COVID-19 pandemic on women, especially those facing multiple forms of discrimination related to poverty, race or disability, is increasingly being documented. As reported in the UN Secretary General’s “Policy Brief: The Impact of COVID-19 on Women”, and captured widely through media reports, women and girls globally suffer more from the socio-economic impacts of COVID-19, simply by virtue of their gender.

In addition to the immediate concerns related to increases in unpaid care work, domestic violence and exposure to the weaknesses of the healthcare system, the pandemic’s long-term economic repercussions are also likely to disproportionately affect women’s productive lives compared to men’s. The specific needs and contributions of women as workers, business owners and entrepreneurs must be better understood and addressed when developing measures to reactivate the economy. All aspects – from accessing financial rescue packages, credit and unemployment benefits to removing barriers for women to perform higher-skilled and better-paid jobs – should be considered for the economic recovery to be effective, inclusive and sustainable.

The manufacturing sector has been one of the hardest hit by the COVID-19 outbreak and ensuing containment measures. Around the world, most manufacturing industries were not considered essential economic activities, the notable exception being food processing, thus businesses were forced to close or reduce their activity. Cuts in payments, order cancellations, shortages in the supply of inputs and raw materials, and restricted transport modalities along global value chains (GVCs) have undermined production and brought factories to a standstill.

Millions around the world have become unemployed because businesses had to close or severely restrict their operations, leaving especially those in low-skill and low-income positions, many of which are held by women, in situations of even higher economic distress.1

Self-employed and informal workers, who are often suppliers of manufacturing firms, have also been forced to halt their activities, thus undermining their livelihoods and leaving them with little or no social protection to fall back on. Women working in the informal economy are overrepresented in sectors hardest hit by the crisis (42 per cent compared to 32 per cent of men). The situation is particularly acute in lower and upper middle-income countries, where 56 per cent of women work in high-risk sectors compared to 39 per cent of men.2

The unequal participation of women and men in different branches of manufacturing further differentiate their vulnerability during the crisis and in its aftermath. For example, preliminary information shows that the textile and apparel branches are among those with the highest sales losses due to the initial shock and the ensuing lockdown brought about by the pandemic. Yet, at the same time, this is one of the branches showing higher rates of women’s employment. While women constitute 39 per cent of the workers in the manufacturing sector overall3, in the textile and apparel branches – a sector characterized by low wages, long working hours and significant gender pay gaps45, they represent up to 75 per cent of total employment6. Also, export firms in these branches have the highest representation of women-owned and/or women-managed businesses in a sample of firms in developing countries.7

Deeply-rooted structural gender inequalities result in unequal access to infrastructure, productive resources and procurement opportunities for women entrepreneurs. Discriminatory property and inheritance laws inhibit women’s access to credit and financial products and services. In 2019, 115 out of 190 economies had at least one gender-based legal restriction on women’s employment and entrepreneurship in place.8 The finance gap among micro-, small and medium enterprises (MSMEs) reflects this phenomenon; despite their smaller average size, women-owned businesses account for a disproportionate share of the finance gap.9 Women entrepreneurs are also disproportionately represented at the micro, small and medium level, and women-owned businesses tend to be concentrated in sectors with lower profit margins than men.

Women-owned businesses tend to be concentrated in sectors with lower profit margins than men. 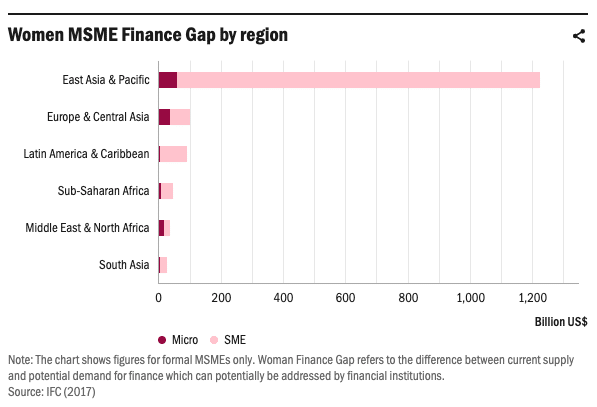 A recent study on manufacturing SMEs’ access to credit in Viet Nam found that women-led enterprises in food and beverages and apparel sectors are one-third more likely, on average, to be denied loans than men-led firms. This gap doubles to 67 per cent in male-intensive industries, such as wood processing, fabricated metal products, electronic and rubbers and plastics, and further increases to 71 per cent during periods of tight monetary policy.10

Thus, structural inequalities in accessing productive resources coupled with emerging evidence on the impact of COVID-19, suggest that women’s economic and productive lives will be affected disproportionately and differently from men.11 As governments seek to lift lockdowns and re-open economic activity, it is unclear if most women will be able to re-enter the economy after periods of unemployment. Their burden of unpaid care and domestic work – women and girls bear 75 per cent of domestic care globally12 – has increased due to the pandemic and further reduces women’s opportunities to participate in the labor market, potentially for periods even longer than the health crisis itself.13 Social protection measures have to be mindful of this reality making sure to target women working in severely hit branches. In addition, recovery plans need to consider specific measures, such as granting access to credit to support women to rebuild their firms after forced shut-downs.

The pandemic threatens to reverse recent gains made in closing the gender wage gap and increasing women’s labour participation in manufacturing.

A pandemic at the outset of technological upheaval and reorganization of global value chains: implications for gender equality

GVCs and trade have historically contributed to development, poverty reduction and advancements in gender equality by providing new opportunities to access higher value markets. The COVID-19 outbreak, however, exemplifies that risk response and GVC recovery plans need to be more inclusive and contain more protection measures for vulnerable groups. As the case of Bangladesh’s garment industry demonstrates, women workers in low-income countries have been hit hardest by the withdrawal of orders from international companies, especially when these do not pay owed wages or severance.14 Unless GVCs are managed more responsibly and the needs of those losing their jobs during the COVID-19 outbreak are considered, recent gains made in closing the gender wage gap and increasing women’s labour participation in manufacturing especially in developing countries will potentially be reversed.

This becomes even more pertinent considering that the COVID-19 pandemic is unfolding at the outset of another phenomenon poised to cause disruptive changes in industry: the Fourth Industrial Revolution. Automatization, digitalization, artificial intelligence and other emerging technologies are gaining a foothold in how we produce, communicate and live. A lot of uncertainty remains about which industries and which types of jobs will most pronouncedly feel the impact of these new frontier technologies and innovations. Emerging trends are pointing into one direction: those working in low-skill and routine manufacturing jobs are expected to bear the brunt of this technological upheaval.15

Due to restricted access to education and training, structural barriers and social norms, these types of low-skilled and routine manufacturing jobs are predominately held by women. As more advanced robots and machines are developed and more widely introduced, there is concern they will, on average, replace more jobs held by women than by men.16 Potential job losses caused by automation could add to those losses already happening due to the COVID-19 pandemic.

Thus, unless policy responses and investments are appropriately targeted, both accelerating technological trends as well as deeply-rooted management practices in GVCs, could further deepen the existing inequalities.

The pandemic has also provided many examples of effective women’s leadership and ingenuity in responding to the crisis. While there are already some indications that female leaders are responding better to the current crisis, evidence suggests a relationship between women’s representation in decision-making and increased social benefits for societies as a whole.17 Through its initiative “Women Rise for All”, the UN is putting women leaders at the forefront of its call to action to meet the challenges of the COVID-19 crisis, including in industry.

We must not, however, lose sight of what UN Secretary-General Guterres calls “the most important global systemic threat in relation to the global economy”: climate change.18 The post-pandemic medium- to long-term economic recovery measures represent a unique opportunity for policymakers to institute bold measures for more resilient, inclusive and sustainable economies, and to reshape industrial development towards environmentally sound technologies. In doing so, it is paramount to harness women’s full potential as leaders, innovators and agents of industrial and environmental change.

The time is now to ensure that everyone equally benefits, participates in and guides industrial development in the recovery phase. In this endeavour, UNIDO continues to be committed to promoting resilience and inclusivity to foster a better future for all.

Disclaimer: The views expressed in this article are those of the authors based on their experience and on prior research and do not necessarily reflect the views of UNIDO (read more).

This article was previously featured on UNIDO and is reproduced with permission. The opinion piece is part of a series of articles by UNIDO’s Office for Gender Equality and Empowerment of Women.